Spring in Yellowstone 2019 - The Short Report!

SPRING IN YELLOWSTONE 2019 - The Short Report!

As planned, we landed in our RV spot May 1st ready to rush into the park, but instead treated ourselves to a quiet evening discussing our strategy for the next morning. As I recall, a 4:30 AM wake up was mentioned. UGH. The bane of this wildlife photographer. 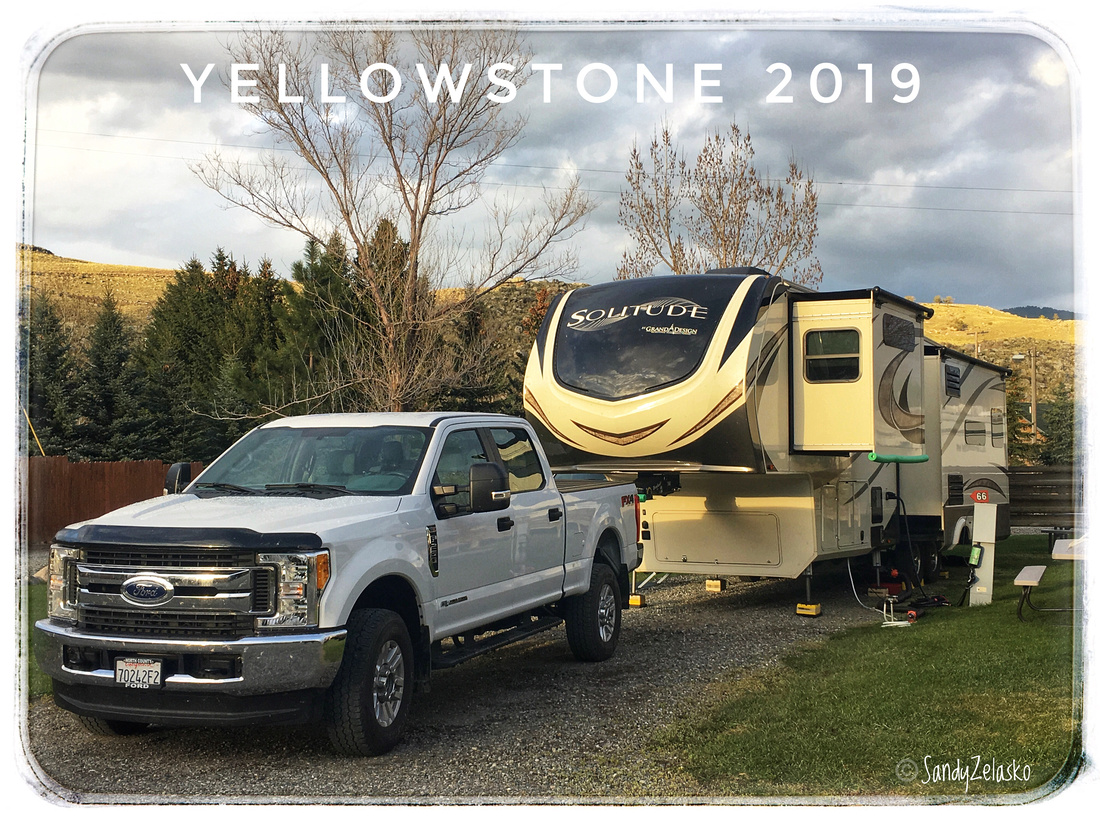 Oh my, where did all the people come from? I did not expect the crowds already. The famous Obsidian Sow and her three cubs of this year (coy) were seen north of Roaring Mountain. The family became a main attraction for the rest of the month. Stories spread that rangers had blocked off the area but that didn’t stop bear followers as they continued to make runs past the coned off zone hoping to get a glimpse. Then the tragic news came, the cubs became separated from their mom when a large boar (male bear) entered the scene. Momma bear finally reappeared days later but sadly with only two of her cubs.

It is tough being a sow and trying to protect your cubs from all the dangers out there. Male bears will try and kill cubs if it gives them a chance to mate with a female. Fast flowing rivers, swollen with spring run-off, speeding vehicles and natural causes all claim the lives of grizzly bears in the park. Please respect the speed limit, maximum 45 mph unless otherwise posted.

More bear news! I made the drive, through the construction at Fishing Bridge, to the Lake Butte area looking for another well-known bear Raspberry and her cub, Snow, who was “kicked out” to be on her own last year. Cubs are typically born in January or February and emerge in the spring. But after two more years, grizzly mothers will strongly embolden their offspring to seek out their own territory. She has taught them all they need to know and is ready to breed again.

Without much of a search, I found Raspberry meandering the shore of Yellowstone Lake. The “Bear Brigade” (volunteers who are trained to control wildlife watching crowds) had everyone under control and we were allowed to watch, from a respectful distance, as Raspberry followed the shoreline then cross the highway for an even better view. Magical! 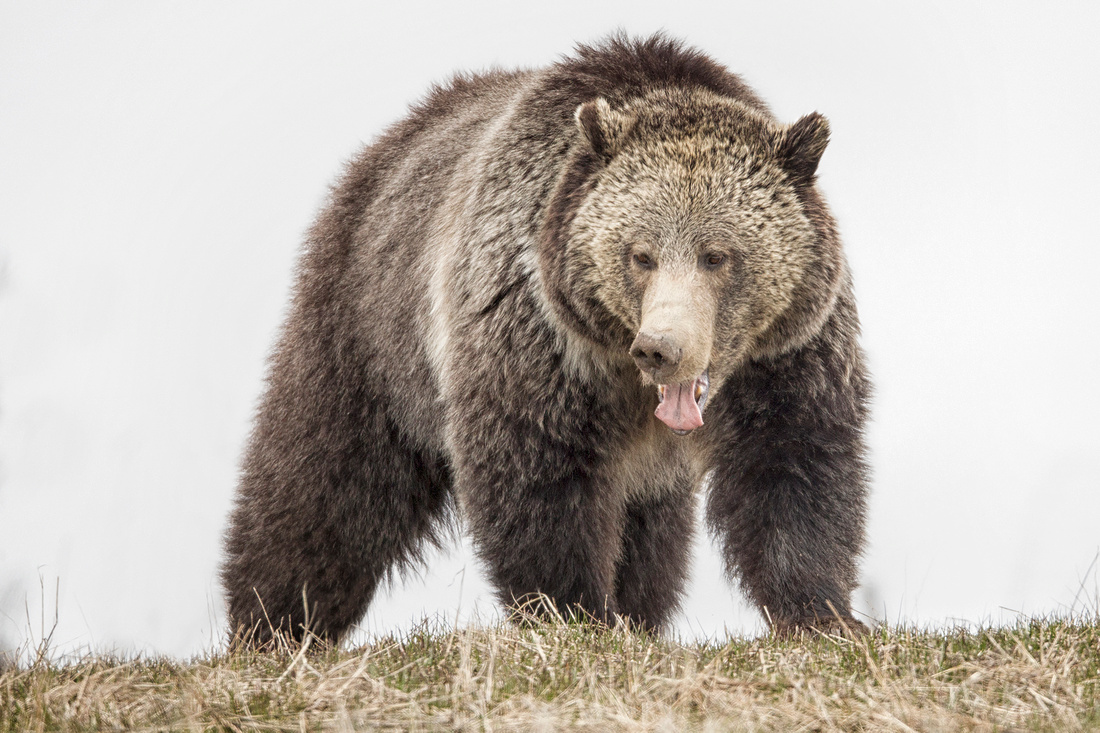 While at the southeastern part of the park, I decided to try my hand at finding the elusive great grey owls I’d heard were near Bridge Bay Campground. No success. I gave it a couple more tries during the month only finding other photographers scouting for the same.

On multiple days, near the Canyon intersection, you could count on a crowd watching a couple coyote mousing in a still snow-covered meadow. Someone down the road exclaimed they were watching a wolf. That happens more often than not. Wolves, along with bears, have become the popular species to see in the park. But this time a coyote was stealing the show.

Most trips to Yellowstone you can count on seeing Harlequin ducks at LeHardys Rapids. Harlequins, an arctic sea duck, use Yellowstone as their southernmost breeding ground and this year about 30 of them were seen just off the boardwalk. Well worth carrying gear, including a tripod, and finding a spot along the icy path to photograph them. Photographers try their hand at slow shutter speeds with a sleeping (or very still) duck. Makes for a pleasing effect with silky water flowing all around the bird. But on this day, I couldn’t resist the chance to show some of their breeding behavior in the turbulent white water on the Yellowstone River.

I’d been dreaming about spending the entire month in the park and found this May’s schedule open enough to do it. Among other things, I previsualized baby bison playing in Hayden Valley and all the images I was going to make. Oh, was I wrong! It was too early for bison to be in Hayden. Darn, I failed to do my homework on this one. Plan B, look elsewhere. So, I did and found families spread all over the park. Not necessarily in the usually places but rather safely tucked from view close to edges of forested areas. Every once in a while, I’d get lucky and an image presented itself.

Exploring Yellowstone in May was full of lessons. Would I do it again? Yes, of course! Despite the early crowds, there were considerably less people then you’ll find in July or even September. The weather was comfortable and storms snuck up on us most days providing dramatic light for photography.

This blog article is by no means a comprehensive collection of all the wildlife to be seen in Yellowstone in May. Yellow-bellied marmots, acorn woodpeckers, black bear cubs, baby geese, pronghorn, badgers and moose are just a few others to mention. I am considering leading a workshop in May 2020. If interested, drop an email or follow InvestInNature.org and watch the “Workshops” page for more information.

Andrew Begum(non-registered)
I am very glad to read this informative article. http://www.google.com/
write for us development(non-registered)
that's the true natural beauty where animals have their freedom, and you capture all moments.
australianwritings(non-registered)
Thanks for sharing this report about spring in YELLOWSTONE which is good and I have read meticulously. I hope, it will be easy for me to visit this place after reading best article about it so once again thank you so much.
Ann C(non-registered)
A whole month in Yellowstone? Wow! What a wonderful experience! Nice, comfortable digs, too.
Kathy Nash(non-registered)
Sandy, I really enjoyed your “diary/blog” about Yellowstone. May is a fabulous time of year in the mountains. I hope you do lead a workshop in Yellowstone next year. Any person who goes will be treated to lots of animals and their babies and who wouldn’t want to experience that? Plus the beauty of the landscape as it sheds it’s winter layers for summer. But it’s so much better than summer because of the storms and opportunities for good light.
No comments posted.
Loading...
Subscribe
RSS
Recent Posts
A Short Wildlife Conservation Story - Black-tailed Prairie Dogs (Cynomys ludovicianus) Wind River Photographers Retreat 2021 South Dakota's Photographic Jewels The Salton Sea Persists: A Photography Destination Spring in Yellowstone 2019 - The Short Report!
Keywords
Wildlife lee photography sandra lee photography sandy zelasko dakota dogs prairie sandra sandy
Archive
January February March April May June July August September October November December
© Sandra Lee Photography 1992-2021